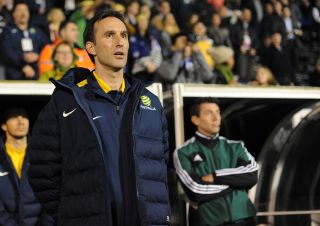 Vidmar stepped in following the dismissal of Holger Osieck on Friday, with the German sacked just hours after Australia were thrashed 6-0 by France in Paris.

Football Federation Australia chairman Frank Lowy has indicated the governing body's preference is for a local to take the top job.

But Vidmar, speaking after the win at Craven Cottage, opted not to confirm his candidacy.

"I won't be discussing anything (in the media)," he told Fox Sports.

"I'm just trying to get over this last few days. I'll just have a bit of a break now and see what happens."

When asked if the comfortable victory on Tuesday had restored any pride in the Socceroos camp, Vidmar said: "A little bit. There's a long way to go.

"There's a lot to ponder after this. We asked for the passion and that's what we got.

"It was a very good result and that's very pleasing. We just wanted a positive performance and that's what we got."

"I just hope that the next coach that comes in can do a good job for us. Not to rush and just to choose the right one."