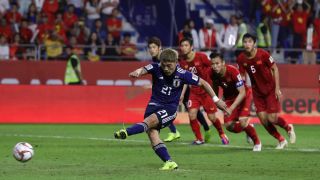 Japan benefitted from a contentious VAR penalty decision on the system's Asian Cup debut as a 1-0 win over Vietnam proved enough to see Hajime Moriyasu's men reach the semi-finals.

Referee Mohammed Abdulla Hassan originally decided there was no case to answer for Bui Tien Dung's challenge on Ritsu Doan in the area, but the decision was overturned following a review at Al Maktoum Stadium.

Doan dusted himself down to convert the penalty, which proved enough to keep Japan on course for a fifth Asian Cup title.

VAR, being used for the first time in the competition from the quarter-finals onwards, had earlier denied Maya Yoshida a first-half goal, but Japan can now prepare for a last-four contest with either China or Iran after winning by a single goal for the fifth time this tournament.

Yoshida's headed goal was overturned after a review when it was spotted the Southampton defender had handled the ball before it crossed the line.

Japan were further frustrated when Dang Van Lam produced fine saves to keep out Takumi Minamino and Takehiro Tomiyasu, the latter seeing his headed attempt from a set-piece pushed to safety.

Japan were in front by the 57th minute, though.

Dung was eventually judged to have stood on Doan's foot after a lengthy stoppage and the winger made the most of the chance by converting low into the bottom-right corner past a despairing Van Lam.

Nguyen Phong Hong Duy fired just wide of the post for a spirited Vietnam and Van Lam thwarted Minamino for a second time but, ultimately, Doan's VAR-awarded spot-kick proved the difference in a tight match.