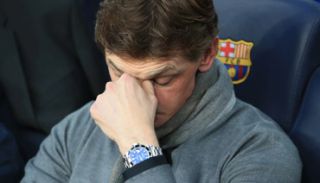 Barca suffered their worst ever European defeat over two legs in the last-four clash against the German champions but were missing their Argentine World Player of the Year Lionel Messi for the 3-0 second leg defeat at the Nou Camp.

Top scorer in Europe's elite club competition the past four seasons, Messi had not recovered sufficiently after straining a hamstring last month and had to watch from the bench as Bayern ended Barca's 21-match unbeaten run at home in continental competition.

"I don't think we need to change any players," a subdued Vilanova told a news conference.

"What we do need is to get our injured players back because they are top performers," he added.

"Bayern Munich came here with all their players available but we are here without some of our key players. I still think our squad is very good.

"I am convinced that if we had been at 100 percent we would have competed in a different way."

Although he has made sporadic appearances since, including at the weekend against Athletic Bilbao, he has at times looked well below his scintillating best.

Vilanova said Messi had felt a "strange sensation" towards the end of the Bilbao game, when he came on as a substitute with half an hour remaining and scored one of Barca's goals.

While he was not injured as such - he received the all-clear from club medical staff last week - it was decided he was not fit enough to help the team as he would have wanted, the coach added.

"I spoke with Leo yesterday and he trained but didn't feel good at all. We waited until after today's training session and I also spoke with the physios.

"We then decided that there was a risk he could aggravate his injury and he wasn't in a position to help the team.

"Given the result from the first leg it was better to leave him initially on the bench. When a player has a problem he can't play and that's that."

The forwards Barca did use on Wednesday - Spain trio Cesc Fabregas, David Villa and Pedro - had little joy against an excellent Bayern defence and it is hard not to conclude that the club needs to sign at least one more goal-scorer.

Another option is to promote a youngster from the B team and 19-year-old Gerard Deulofeu is being touted as a hot prospect.

Their defence is almost certain to need reinforcements with Puyol, 35, getting on, the less-than-convincing Mascherano originally a midfielder and youngster Marc Bartra looking green.

The shock of the reverse to Bayern will certainly prompt some soul-searching among the squad as they turn their attention to wrapping up the La Liga title.