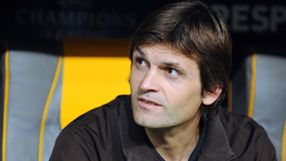 Guardiola's decision to step aside to rest and recuperate brings to an end a four-year tenure during which he led the Catalans to 13 trophies, including two Champions League triumphs and three straight Spanish La Liga titles.

The announcement on Friday at an emotional news conference at the Nou Camp, with Guardiola flanked by president Sandro Rosell and sporting director Andoni Zubizarreta, came after months of speculation over the 41-year-old's future.

It was also three days after his team were denied a place in the Champions League final by Chelsea in a spectacular match and followed last weekend's 2-1 La Liga defeat at home to rivals Real Madrid that all-but ended their hopes of a fourth title in a row.

"Four years is an eternity for a coach of Barcelona," Guardiola said as stony-faced first-team players including Xavi, Andres Iniesta, Victor Valdes and Carles Puyol looked on.

"Four years wear you down and that's the fundamental reason," the former midfielder added.

"The person who will occupy my place will give something that I cannot, because being here for four years is hard, the demands are very high and you have to be very strong.

"When I started out I thought I could achieve everything and that's what I want to get back."

Rosell and Zubizarreta said they had promoted Vilanova, who had an undistinguished career as a player but has been a crucial part of Guardiola's coaching success, because he was well placed to protect his close friend's legacy.

The pair were contemporaries at Barca's famed 'La Masia' youth academy and Vilanova was also Guardiola's assistant in his first coaching role in charge of the club's B team.

He was famously poked in the eye by Real coach Jose Mourinho during a mass brawl earlier this season and had surgery to remove a tumour on his saliva glands in November which sidelined him for several weeks.

"Personality, integrity, commitment to the club and inside knowledge," Zubizarreta said when quizzed about why Vilanova was a good candidate.

"We have always said that when we need a player we look to the reserve teams but when we need a coach we look within too, to Tito," added the former Barca and Spain goalkeeper.

Media reports had expected a more high-profile replacement for Guardiola such as Athletic Bilbao's Marcelo Bielsa.

Guardiola, who said he would be available for consultation if ever needed, had previously renewed his Barca contract on an annual basis and waited until February 8 last year before agreeing a new deal.

He went on to capture a third consecutive La Liga title and a second Champions League crown, as well as the Spanish and European Super Cups and the Club World Cup thanks to a passing style of unmatched fluidity and control.

Known as a superb motivator, he has managed to get the very best out of hugely-gifted players like Argentina forward Lionel Messi, winner of the last three World Player of the Year awards.

"I want to thank Pep with all my heart for the huge amount he has contributed to my career, both professionally and personally," Messi said in a statement on his Facebook page.

The 24-year-old added that he had preferred not to attend Guardiola's farewell news conference as he was feeling too emotional.

Guardiola hinted he would be taking a break from the game but a host of suitors will be queuing up to persuade him to return.

Inter Milan, Manchester City and Chelsea are among the clubs to have been linked with the sharp-suited Catalan while national team jobs with England and Qatar have been mentioned in oth