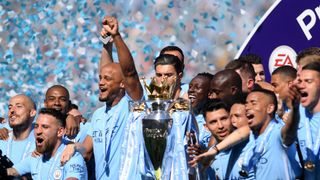 No side has retained their crown since Manchester United nine years ago, when Alex Ferguson's Red Devils pipped Liverpool to top spot by four points to make it three in a row.

United were contenders last season but they could not stop City romping to the title, Guardiola's men finishing the campaign with record tallies in terms of points (100) and goals scored (106).

Across the 38 games City only lost twice – to Liverpool and United – and also picked up the EFL Cup, while reaching the Champions League quarter-finals.

Guardiola has strengthened his squad for 2018-19 with the addition of Riyad Mahrez from Leicester City, and Villa believes the defending champions are favourites to retain their crown.

"I believe that he can do it again because he is a good coach, he has a good team, and he has the support of Manchester City and the City group," said Villa, who worked with Guardiola at Barcelona.

"They are one of the best teams in the world and I don't have any doubt that he can take any trophy again this year and why not the best trophy that the club is fighting for from a long time ago, the Champions League."

City open the defence of their title against Arsenal on August 12, before their first home match against Huddersfield Town seven days later.