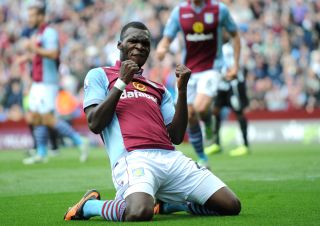 The Belgian striker has not featured since picking up a hip injury in his side's 1-0 victory over Norwich City at Carrow Road in September, but trained with his national side during the international break and was an unused substitute in the 1-1 draw with Wales.

"He trained the last couple of days with Belgium and was on the bench which indicates that he felt pretty good," said Lambert.

"Our medical team spoke to theirs - as you do with every player - and everyone seems to have come back not too bad.

"I don't know if he'll be ready for Tottenham. He'll know himself how he's feeling. All I know is he was on the bench last night.

"He trained for a couple of days and hadn't had a reaction, but that might change, I'll just wait and see."

Benteke is Villa's top scorer this season, with five Premier League goals to his name.