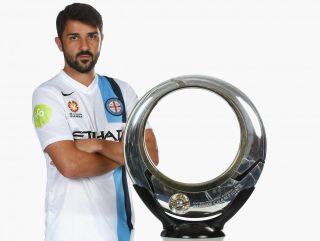 Villa trained with City for the first time on Monday after arriving from parent club New York City ahead of his 10-game loan stint in Melbourne, and Kisnorbo said the former Barcelona and Atletico Madrid striker quickly showed his quality.

Apart from sprinting drills, Villa completed a full session at La Trobe University and will train on Wednesday, Thursday and Friday in the hope of proving his fitness to coach John van 't Schip.

Both Van 't Schip and New York City football operations director Claudio Reyna told Goal on Tuesday that if Villa puts his hand up to play, he will be involved when the A-League club face Sydney FC on Saturday night, and Kisnorbo claimed it will be a sight to see.

"His first touch is amazing, he creates his own space, I don't want to reveal too much but, yeah, you can see why he mixes with the best," the central defender told Goal.

Kisnorbo admitted the rest of the City squad were a bit like fans when Villa arrived.

"I think the excitement was there. You know, we have a player amongst the playing group who's won a World Cup, won a European Cup, all-time leading goalscorer for Spain," he said.

"I think the excitement of that alone, you know, we're a fortunate bunch of guys to have that and we're fortunate to have him in our playing group."

Reyna said "it'll be very hard to hold [Villa] back" this week with the 32-year-old striker desperate to return to competitive action after over three months since his last proper match - Spain's final World Cup encounter in Brazil against Australia.

Villa had a good night's sleep on Monday night - a good sign as he attempts to overcome jet lag.

"It's really a coach's decision, as well as how David feels... but David wants to play, he's a competitor... and I think we're definitely going to see some minutes of David Villa playing on Saturday," Reyna said.

Kisnorbo added the arrival of Villa - so soon after Alessandro Del Piero and Shinji Ono departed the A-League - is just another step in the right direction: "I think it's just great for the game in general, that a person of his stature is here in Australia, playing our great game."