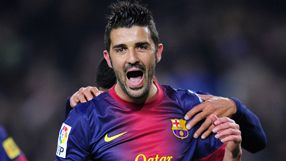 The Spanish international is Barca's top scorer in the cup with five goals, and while his opportunities have been restricted in La Liga and in Europe he has started all four cup games so far.

The 31-year-old, who broke his leg in December 2011 and missed Euro 2012 as a result, was left out of Sunday's trip to Malaga and remains a doubt for Saturday's La Liga match at Real Sociedad, the leaders said.

"David is coming back after a serious injury and there was a moment when he appeared to be fully recovered and we were giving him more minutes," Barca coach Tito Vilanova told a news conference.

"After the Spartak Moscow game he had a problem that disrupted his progress, and the same has happened again, but they are problems that have nothing to do with his leg break."

Barca were 3-1 winners at Malaga in the league on Sunday, but with both teams qualified for the last 16 of the Champions League, Vilanova warned Manuel Pellegrini's side were not to be under-estimated.

"If you take into account who we played against, we played a very good game in the league," Vilanova said.

"But this is now like a Champions League tie, and Malaga have already demonstrated what they are capable of. Over two legs, you only need one thing not to work well and things could get much more difficult."

The return leg is next week.