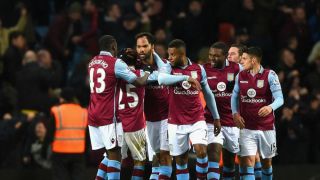 Aston Villa do not fear the drop and contingency plans are in place to recover from Premier League relegation, says the club's new chairman Steven Hollis.

It has been a desperately poor season for Villa who are rock bottom of the Premier League and eight points from safety, although a midweek 1-0 over Crystal Palace has lifted the mood slightly at Villa Park.

The victory over Palace was just Villa's second league win of the campaign and, with top-flight clubs set to benefit from a bumper new television rights deal next season, there is pressure to avoid relegation.

"If we unfortunately have to go through a relegation phase, we have no fear of that," Hollis told BBC Sport.

"[Villa owner] Randy Lerner is committed and is going to support the board and executive team to take the actions we need to put us in the best possible position so we can come up as quickly as possible.

"This club will be here and we will be on a stronger footing."

Hollis says that Lerner, who has made no secret of his desire to sell the club, has given him a clear remit.

"Randy was very clear when I met him that there is some heavy lifting that needs doing at this club to address the structural flaws it has experienced over the last five years," he added.

"Randy wanted the work to be done and wanted it done quickly, hence I am here."