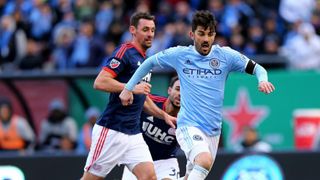 The 33-year-old hopes Xavi will join him in the US, and maybe in New York, rather than choosing to head to the Middle East – with Al Sadd already heavily linked with a move.

"Yes, we have talked about it [moving to MLS] but he is now at Barcelona," said Villa.

"He still has another year of contract. I don't ask him a lot on his future plans and if he tell me it's not normal I made them public.

"Xavi would be suitable in any competition or club all over the world. I am sure everyone of MLS would welcome him nicely.

"Obviously, I would like to have him here but it's just a wish. There are several times in this life you wish something and not always can be done.

"Therefore, it's not something which I can deal with. Hopefully, he will come here but if not, I wish him the best for his future because he is a big friend of mine and a great football player."