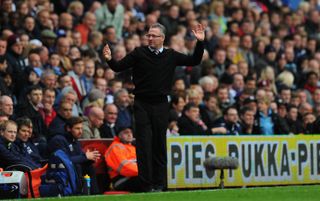 Goals in either half from Andros Townsend and Roberto Soldado did the damage for Spurs as they extended their unbeaten record against Villa to 11 games in all competitions.

However, Lambert felt his side could have got something from the game, had they taken advantage of their chances, notably Christian Benteke's off-target header just after the hour.

"I can't fault the lads for their effort and on another day we may have got something," he told Sky Sports.

"I didn't think there was too much in it. When Benteke headed over at 1-0 down, that was a big moment.

"Big moments in big games, you have to try and take them. He's just back (from injury) and he'll score many goals for us yet I'm sure. It was a big moment for us."

Lambert also took heart from his side's showing against Spurs, who move to fifth with the win.

"You're up against a team that has spent an awful lot of money. You look at the bench and they have some top players," he continued.

"If we play like that, we'll win more than we lose."

The defeat leaves Villa 13th in the Premier League with 10 points from eight games.