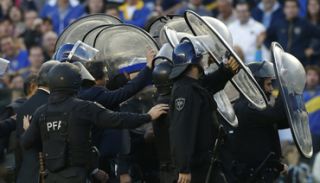 Uruguayan striker Santiago Silva equalised six minutes before half-time when he steered the ball right-footed inside the far post from Walter Eriviti's square ball on the right.

However, the match was held up for close to 10 minutes in the second half when River coach Ramon Diaz was sent to the stands for allegedly insulting the referee and hardcore Boca fans behind the River goal lit flares and threw objects including petards on to the pitch.

Some objects hit River goalkeeper Marcelo Barovero, who appeared to tell referee German Delfino his team could not play on under the circumstances.

Delfino, who dished out yellow cards to several players on each side in a keenly contested clash between the most bitter rivals in South America, opted not to abandon the match and added 12 minutes on to the 90.

"We're going with a bitter taste, we came for the three points, we lacked cool heads in front of goal," said Lanzini, whose team, unbeaten in six matches and challenging for the title, squandered several chances.

River retained third place and are four points behind leaders Lanus, who won 2-1 at Argentinos Juniors on Saturday.

Boca, near the bottom of the 'Final' championship standings after going 11 matches without a victory in the league, had defender Guillermo Burdisso sent off for a two-footed challenge on Sanchez in the dying minutes.

River should have been two goals ahead when Silva scored for Boca but in the 35th minute Sanchez contrived to lob an easy chance the wrong side of the post after Juan Manuel Iturbe's left cross had beaten the defence.

Boca nearly snatched victory from a last gasp corner when Barovero saved point-blank from substitute Gonzalo Escalante at his near post.

After a 2-2 draw at the Monumental in October in the 'Inicial' championship in the first half of the season, both derbies have been drawn since River returned from relegation in 2011.

River have not won at La Bombonera since 2004.

Independiente, another of Argentina's co-called Big Five clubs, won 2-0 at Tigre for their second successive victory in a tough battle to avoid relegation for the first time.

Young Paraguayan striker Adrian Fernandez scored both goals, the first a fine lob over goalkeeper Javier Garcia from 40 metres in the eighth minute.

Fernandez made it two in the 40th when he raced through to hit Colombian striker Juan Caicedo's square ball on the edge of the box. Garcia parried it coming out near the penalty spot but the ball looped high and dropped into the goal just below the crossbar.

Striker Silvio Romero hit both goals for Lanus to take his tally to eight at the top of the scorers' list.