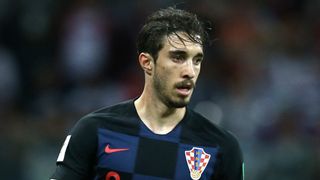 Sime Vrsaljko has been named in Croatia's starting line-up to face England despite concerns over a knee injury.

It was feared the Atletico Madrid full-back would not recover in time after sustaining the problem in the quarter-final against Russia, but he has been included by coach Zlatko Dalic.

Goalkeeper Danijel Subasic is also fit enough to play, with Croatia making just one change to the team that edged out the hosts on penalties, as Marcelo Brozovic comes in for Andrej Kramaric.

England, meanwhile, have named the same starting XI for the third match in a row, with Jordan Henderson passed fit to line up in midfield and Raheem Sterling joining Harry Kane in attack.