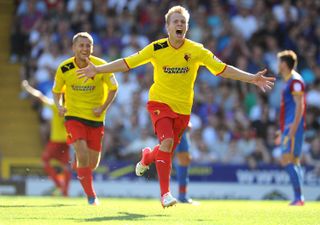 The 21-year-old made an instant impact in English football with Watford last term as he scored 22 goals in 44 Championship appearances.

Vydra’s prolific form during his season on loan at Vicarage Road saw him crowned Championship Player of the Year, and he helped Watford to reach the play-off final where they were defeated by Crystal Palace.

The Czech Republic international, though, will now get the chance to test himself in the Premier League after joining a West Brom side that finished eighth in 2012-13.

Head coach Steve Clarke is confident that Vydra, who has made just four appearances for Udinese, can make the step up to the English top flight.

"He had a really good year with Watford and we believe he's got the qualities to score goals at a higher level.

"Hopefully, he'll show that this year with us.

"We had Matej watched throughout last season.

"As well as some excellent scouting reports, we had some really good feedback from within Watford about Matej as both a player and person.

"I've said previously we're a bit light in the forward areas and Matej will increase competition for places.

"He's another good quality striker to add to the other three senior forwards we have here."

Pairing Vydra with fellow new recruit Nicolas Anelka, two players at opposite ends of their respective careers, is an exciting attacking prospect for West Brom fans - with the club reportedly fending off interest from the likes of West Ham and Sunderland to sign Vydra.

Richard Garlick, the club's sporting and technical director (designate), confirmed: "We faced a lot of competition for his signature and we're delighted he has chosen us to make the step up to Barclays Premier League level.

"Matej feels he can be successful here and we believe he will bring a different dimension to our attacking options.

"He's a clever player, is quick and can play anywhere across the front three positions, or in a slightly withdrawn role."