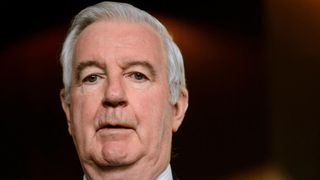 Arsenal manager Wenger spoke to the media on Friday and said more can be done by UEFA and FIFA to combat doping in the game after an independent commission established by WADA claimed the IAAF Council must have known about the extent of drug tacking in Russian athletics.

Wenger has been outspoken about doping and football's governance of the issue, which he feels is a growing problem, since Dinamo Zagreb midfielder Arijan Ademi was banned for four years in November, after failing a drugs test following the club's 2-1 Champions League win over Arsenal two months earlier.

Reedie was quizzed on Wenger's suggestions on Friday that doping in football has not been properly examined and the Brit told Omnisport: "If he's talking about the elite level then the Football Associations in this country have a reasonably comprehensive anti-doping policy which is run by UK anti-doping – one of the top national anti-doping organisations in the world.

"Before the last World Cup in Brazil, FIFA tested every player who took part before the tournament started.

"They took all the appropriate samples and sent them to a laboratory in Switzerland and there were not positive samples.

"At the top end the statistics look as if they are acceptable. If there is a problem then I'm sure the football authorities would like to know where it is and the one thing that football has, which it should have no problems with, is money.

"So if there is an issue there it is clearly within football's abilities to deal with it because top countries will all have good national anti-doping organisations.

"It is in their interests and it's in football's interests that these players are tested, that there is proper education and that any problems are resolved."

Pushed on Wenger, who believes UEFA "basically accept doping" after Dinamo's victory against Arsenal was not overturned despite Ademi's suspension, Reedie added: "There is a very good anti-doping programme run by UEFA, in which case Mr Wenger should probably be in touch with the top people at UEFA and say 'my belief is that there is a problem, what are you going to do about it?'. And they will go to the national associations.

"UEFA has a very good blood passport system, for example. This is something they take very seriously.

"It's easier for UEFA in a sense because they have competitions going on all the time, every year. Whereas FIFA has one big tournament, once every four years."