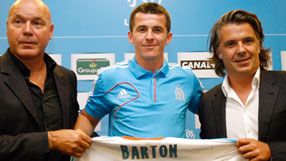 Barton completed a season-long loan move from Loftus Road to the Stade Velodrome on the final day of the summer transfer window, and has so far made just one appearance for the nine-time French champions in a Europa League tie with Fenerbahce.

Speaking exclusively to FourFourTwo.com, Waddle, who spent three years with L’OM between 1989 and 1992, explained that he believed Barton would struggle to force his way into Ligue 1 club’s first team.

“I was very surprised at the news,” Waddle said. “Marseille are a big club in France - you expect them to bring in players who are internationals.

“Marseille already had players very similar and perhaps a bit better than Joey, so I don’t see how he can improve the team. I don’t know the ins and outs but it was a strange move and I think he’ll do well to get in the team.”

Barton has, of course, never been too far from controversy, but has so far avoided making headlines in France for the wrong reasons.

The former Newcastle and Manchester City man’s arrival in the South of France was met with positivity by the club’s fans, who welcomed the much-maligned midfielder by unfurling a banner name-checking The Smiths’ Sweet and Tender Hooligan after the 30-year-old tweeted that the Manchester band were among his favourites.

But Waddle, now a pundit with ESPN, has warned that Barton must continue to act respectfully if he is to avoid incurring the wrath of supporters the former England winger describes as ‘the most fanatical in Europe’.

“If he goes out there and puts in the performances and does the business then that’ll not be a problem; they’re not going to look at what he’s done before," Waddle explained. "But if he has his moments - saying daft things or causing trouble - they will turn on him.

“He’s got to watch that. We know Joey’s temperament and the things he’s done, so he’s got to be on his best behaviour because if they turn on you, you’ll not play again - they’ll send you home and they’ll get rid of you because that’s the way the club works.

“I was lucky I never had that problem, but I’ve seen [the fans] when they don’t like somebody. When they really don’t like you, you’ve got to get out of town.”

Waddle won three successive Ligue 1 titles and picked up a European Cup runners-up medal during his time in the south of France, and was hugely popular with Marseille's fans. The 62-times capped England international says the city is a wonderful place if you have the public on-side.

“I was there for three years, it was fantastic. It took me maybe three months to settle and get used to the football and the lifestyle, but after that it was a fantastic place.

“It’s a massive place with one football team. The locals always say hello wherever you go and the supporters are unbelievable. Everyone is basically just blue and white and doors open as soon as you do the business in that shirt.

“If you do well for them you basically get everything sorted for you; food, drink, even parking tickets - I had about 70 of them during my time there and didn’t pay one!

“I suppose it's a bit like Newcastle - they’re football mad. But I got to say they were the most fanatical fans I played in front of. They follow the club wherever and in vast numbers. That’s what they live for - those Saturday nigh