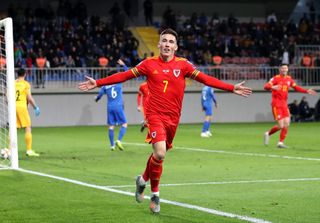 Wales kept alive their hopes of automatic Euro 2020 qualification with a comfortable 2-0 victory over Azerbaijan in Baku.

First-half goals from Kieffer Moore and Harry Wilson gave Wales a first away win in 13 months on what was a satisfying night for manager Ryan Giggs.

Wigan striker Moore put Wales into a 10th-minute lead – his second goal in four appearances – before Wilson ended a 13-month wait to get on an international scoresheet with the simplest of headers.

The Wales defence was seldom troubled and key men Gareth Bale and Aaron Ramsey both had game time after injury and before Tuesday’s final qualifier against Hungary.

Wales had been guaranteed the cushion of a play-off spot in March by Sweden winning in Romania on Friday.

But Wales had their sights set on automatic qualification – and almost certainly needed closing wins against Azerbaijan and Hungary to do so.

Wales were boosted by the availability of Bale, the Real Madrid forward declaring himself fit after over a month out with a calf problem.

But Giggs did not risk Ramsey from the start, and chose Ethan Ampadu and the inexperienced Joe Morrell – who impressed in replacing the suspended Joe Allen – to protect the back four.

Azerbaijan had not won at home for 12 months and were without a victory in European qualifying.

But the Azeri had drawn with Croatia at home in September and Giggs had highlighted the danger of underestimating opponents ranked 111th in the world – 87 places below Wales.

Azerbaijan goalkeeper Salahat Agayev saved from Wilson and Morrell in the opening nine minutes as Wales started at a good tempo and on the front foot.

But Agayev was helpless when Wilson sent his corner to the far post and the 6ft 5ins Moore towered above two defenders on the line to head home from close range.

Moore almost prospered further as Agayev sprinted from his line to save with his legs and then held a header after Bale had beaten two defenders with disdain.

Wales doubled their lead after 34 minutes when Daniel James was fed down the left and the Manchester United winger cut inside and on to his right foot.

James’ stinging effort hit both crossbar and post before bouncing up for Wilson to slot the rebound, his first international goal since an October 2018 winner against the Republic of Ireland in Dublin.

Azerbaijan wanted a penalty when Dmitri Nazarov’s struck Tom Lockyer on the arm five minutes before the interval.

But German referee Deniz Aytekin was not interested and booked Nazarov for dissent.

It was a cold night in Baku and Bale came out for the start of the second half wearing a pair of gloves.

The question was how long Giggs would keep his talisman on the pitch due to the close proximity of the Hungary showdown and Bale being a booking away from missing that game.

Wilson went close again and Wales had the ball in the net again five minutes after the restart, but Lockyer’s header was disallowed for an Ethan Ampadu push on Agayev.

Bale was replaced just before the hour with Ramsey making a welcome return as Wales saw the game out with ease.

Wilson and substitute Rabbi Matondo picked up late yellow cards as the game became bad-tempered late on,  but Wales will head into the Hungary showdown full of confidence.