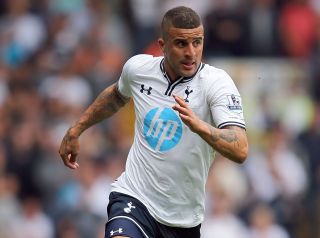 Walker joined the London club from Sheffield United in July 2009 but had loan spells with the latter, Queens Park Rangers and Aston Villa before establishing himself in the Tottenham team.

Now an integral member of Andre-Villas Boas' squad, the 23-year-old has nine caps for his country and featured in the FIFA World Cup qualifier against Montenegro earlier this month.

He was voted Young Player of the Year by the Professional Footballers' Association in 2012 and has made total of 112 Spurs appearances.

Walker has scored just two goals for Spurs, although his first was a memorable long-range winner in a north London derby in October 2011.

The right-back has made 12 appearances in all competitions for Spurs this season and featured in Sunday's narrow 1-0 win over Hull City.