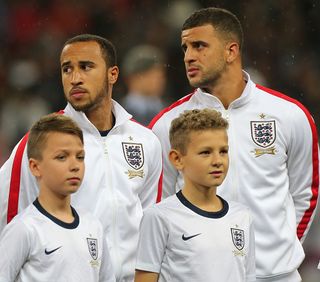 Townsend made a shock start for England in Friday's 4-1 win over Montenegro, but repaid the faith of manager Roy Hodgson with an excellent goal in an impressive performance.

The FIFA World Cup qualifying win greatly boosted England's chances of reaching Brazil 2014, a spot which they will confirm with a home victory against Poland on Tuesday.

Walker hopes the performance is just the start of Townsend's England career and has tipped him to be a star of the future.

"I'm made up for Andros. When I found out he was starting I think I was more excited than him," Walker said.

"I train with him and he's a nightmare. He just sleeps, eats and breathes football and I pray to God that this is just a stepping block for him to go on and do big things.

"He just wants to get at players. As a full-back you don't want a right midfielder who is left-footed running at you. It's a dreadful thing."

Walker – who will miss Tuesday's clash with Poland due to suspension – feels Townsend can make a big impact for England going forward.

If England qualify for Brazil, Townsend would be in the frame for selection, and when quizzed if the 22-year-old could make a big impact during the World Cup, Walker said: "I hope so. I hope he keeps putting in performances like that and we get to where we want to be in the summer."