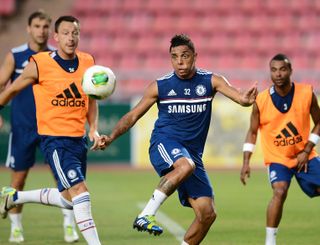 The Brazilian, who joined Chelsea from Fluminense in January, is set to move to San Siro for the 2013-14 season as Inter look to improve on their ninth-place finish last term.

Wallace has yet to make an appearance since moving to Stamford Bridge and is delighted at the prospect of linking up with Walter Mazzarri's side.

"Wallace is truly very happy that things all went for the best and now he just wants to wear the Inter jersey as soon as possible."

The 19-year-old right-back is poised to become Mazzarri's 12th recruit of the transfer window since leaving Napoli in May to take over from Andrea Stramaccioni.

Mazzarri has brought in centre-backs Rolando and Matias Silvestre to help boost the defence, while Diego Laxalt, Mauro Icardi and Ishak Belfodil have been added to the forward line.

Inter start their Serie A campaign with a home game against Genoa on August 25.