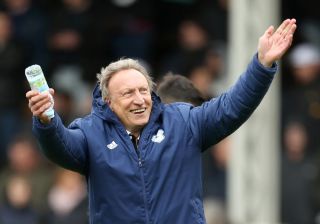 Cardiff boss Neil Warnock beat Luton to the signing of Isaac Vassell and was rewarded when he came on to score a last-gasp winner against the Championship new boys.

Aden Flint got on the end of Josh Murphy’s teasing free-kick to volley home his first goal for the Bluebirds in the 56th minute.

After German forward Robert Glatzel missed a golden chance from a Hoilett cross, Luton levelled when Matty Pearson headed Luke Berry’s cross past Alex Smithies into the bottom corner but Warnock brought on Vassell in place of Glatzel and it proved to be a match-winning move.

“There are twists and turns in the window and you have to take advantage if you can,” said Warnock.

“It’s not just a goalscorer goal, he ran 50 yards to close someone down and it just spread to the crowd and the other players.

“I watched him on a cold windy night at Truro when I was out of work for a few weeks and he did everything right that night.

“He played up front and on the right and in the hole and he ran and ran and ran. I just feel there is something in him. He’s had a bad injury but he has a lot to learn and a lot to prove.

“I thought we showed a lot of character, we had five players making debut and had nervous characters before game. But I thought we really grew into it.

“We needed a goal to dampen Luton’s enthusiasm and we had enough chance to make it comfortable.

“They took their chance in the second-half and made it difficult for us, but credit to us we didn’t sulk. Junior came on and delivered a great ball and it was nice to see Isaac come on and finish.”

Vassell made Luton rue their failure to get a deal over the line, and manager Graeme Jones revelled just how close he was to joining the Kenilworth Road club.

“At one stage, he was coming. But other clubs got involved and we were unable to compete financially,” said Jones.

“But not defending the cross is more disappointing than not signing him. It just showed how ruthless the Championship can be. We have (to) learn from it. I’m not thinking about who scored, but who’s stopping the cross.

“We didn’t control the moment. We were slicing things and putting it out for throw-ins. That’s how they play. It’s not how we play. We played really well for 94 minutes and competed but the game is about 95.

“We made some rash decisions when we were fatigued. I am disappointed with the first goal because we had worked at that a lot.

“The only thing I asked the players to do was be themselves before the game. Overall they were, it’s just the last minute of the game, we got punished.”