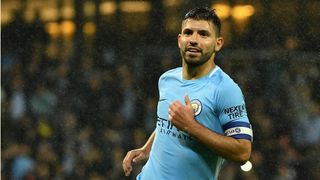 Sergio Aguero showed off his skills with a superb nutmeg on Manchester City coach Mikel Arteta as he closes in on becoming the club's all-time top goalscorer.

Aguero and City drew a blank in Tuesday's EFL Cup tie against Championship side Wolves at the Etihad Stadium on Tuesday, Pep Guardiola's men needing heroics from Claudio Bravo to triumph on penalties after a 0-0 draw.

The Argentina striker drew level with Eric Brook's club record of 177 goals with a penalty against Burnley in the Premier League on Saturday but he was made to wait to claim the record outright by Wolves, with Guardiola blaming the EFL Cup match ball for his team's troubles.

However, Aguero was clearly comfortable with the ball used in training earlier in the week, flicking a pass between the legs of former Everton and Arsenal midfielder Arteta - now a coach at City - before spinning away to celebrate wildly.

Watch the clip of Aguero's brilliant skill below: