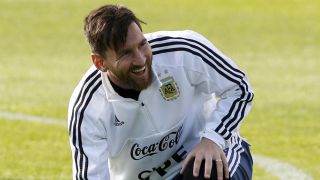 It seems LaLiga defenders are not the only ones that struggle to get their paws on Lionel Messi.

The Barcelona superstar, currently resting up after Argentina's premature World Cup exit, has been captured confounding his sizeable pet dog with the kind of skills that have made him an icon at Camp Nou.

The video was uploaded to Instagram by Messi's wife, Antonella Roccuzzo, and sees the 31-year-old dinking a ball back and forth over the eager Dogue de Bordeaux, fittingly named Hulk.

Is this what a five-time Ballon d'Or winner does instead of walking their pooch?

Messi will link up with a portion of his Barca team-mates in training on Tuesday ahead of the full squad's return from their pre-season tour of the United States.