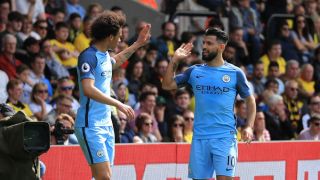 Manchester City emphatically made sure of their place in the group stages of the Champions League next season by thrashing Watford 5-0 at Vicarage Road.

Pep Guardiola's side made the most of an abject showing from their hosts, with the home crowd making it clear that departing head coach Walter Mazzarri will not be missed.

City's grip on third place ahead of Liverpool was rarely in doubt after captain Vincent Kompany headed a fifth-minute opener and Sergio Aguero's first-half brace took him to 33 goals in all competitions this term.

The goalscoring emphasis then shifted from Argentina to Brazil, with Fernandinho and Gabriel Jesus – the latter making it seven goals in eight Premier League starts – completing the scoring.

It meant City answered their manager's call to be more clinical in front of goal as he contemplates the first campaign of his coaching career without a major honour.

A lapse from Watford goalkeeper Heurelho Gomes almost handed City an opener inside the opening minute but a heavy touch from Aguero let him off the hook before Jesus' header was cleared off the line by Jose Holebas.

The hosts’ early charity saw them punished though when Kompany was allowed ample room to plant a header beyond Gomes from Kevin De Bruyne's corner.

Aguero was then denied by a fine reaction save from Gomes and wildly lashed a volley over on the rebound but netted his 32nd goal of the season midway through the first half.

Not for the first time, Watford were exposed on the break and De Bruyne threaded through a measured pass for the striker to clip a finish into the bottom left corner.

City produced a goal to delight their manager in the 36th minute – the move starting with goalkeeper Willy Caballero before, several passes later, David Silva released Leroy Sane down the Watford right to lay on a left-footed finish for Aguero.

Daryl Janmaat lunged in vain to try to halt Sane by any means necessary and succeeded only in injuring himself.

It meant the dubious pleasure of a debut for 19-year-old defender Andrew Eleftheriou against rampant opponents, who were 4-0 up at the interval when Fernandinho bustled his way on to a return pass from Jesus to prod home.

Watford made a better fist of things early in the second period as Caballero needed a strong wrist to repel a rasping strike from Stefano Okaka before M'Baye Niang blasted into the side netting.

The home fans chanting "off, off, off" when a complaining Mazzarri was given a dressing down by referee Jon Moss did little for the departing head coach's mood before Aguero passed up a gilt-edged chance for his hat-trick on the end of another Sane cross.

City's top scorer turned provider in the 58th minute, with Jesus controlling a bouncing ball, shrugging off Tom Cleverley and lifting a finish beyond Gomes and Eleftheriou's attempts to clear on the goalline.

Gomes was not ready to hoist the white flag as he twice denied Aguero the matchball before the Argentinian concluded his most prolific season in City colours by making way for Kelechi Iheanacho.

By that stage, Jesus Navas and Bacary Sagna had joined the similarly out-of-contract Caballero and Gael Clichy on the field for City, Yaya Toure having departed with an embrace from his manager.

Guardiola's side could look somewhat different come August but he will hope to retain such attacking verve when they aim to banish the memory of trophyless season.