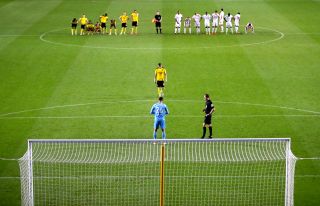 Daniel Bachmann produced three great saves in the shoot-out as Watford beat Oxford after Ken Sema rescued the Hornets with an 89th minute equaliser in the 1-1 draw.

The Championship side won the spot-kicks 3-0 to secure a trip to Newport in round three.

Rob Hall fired Oxford in front on 26 minutes with a fierce drive from outside the box.

Both teams showed eight changes from the weekend, with four players making their debuts for the Hornets.

One of those, Croatian striker Stipe Perica, almost scored inside 60 seconds but his shot well saved by Jack Stevens.

Perica went even closer on 11 minutes, heading Toby Stevenson’s cross onto the bar.

But Oxford then created a mass of chances. Derick Osei and Cameron Brannagan forced good saves out of Bachmann, and centre half Elliott Moore shot against the post at a corner.

Watford had to play with 10 men in the closing stages when Marc Navarro hobbled off after all their subs had been made.

But Sema fired into an empty net at the death after Joao Pedro mis-kicked, to set up the shoot-out where Watford prevailed.