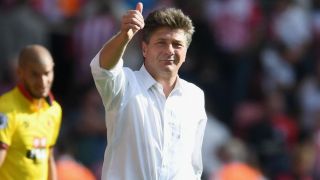 Watford head coach Walter Mazzarri praised his new team's battling qualities after they fought out a 1-1 draw at Southampton despite being reduced to 10 men on the opening day of the Premier League season.

Operating with a 3-5-2 formation, Watford impressed during the first half after Etienne Capoue gave them a ninth-minute lead.

Southampton, also playing under new management in the form of Claude Puel, grew in stature after half-time and debutant Nathan Redmond volleyed them level before the hour.

Watford's task became steeper when substitute Ben Watson was sent off for a professional foul on Shane Long with 14 minutes remaining but, although Redmond had a second chalked off for offside, they managed to withstand the onslaught.

"I am very happy with how we did. I look at the performance more than the point," Mazzarri told television reporters at St Mary's.

“When we had 10 men we were not able to play our game but the team showed great character.

"I think in the first half we could have got a bit more. When our energy was good we played a great game but we couldn’t quite finish the game off.

"The players have done well with the formation and I think we were unlucky with the red card because we were playing well at that moment."