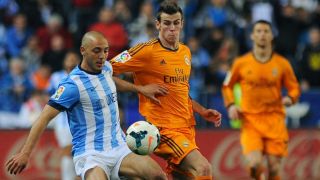 Watford have confirmed the signing of Morocco forward Nordin Amrabat from Malaga.

The 28-year-old moves to Vicarage Road for an undisclosed fee after spending two years in La Liga, initially on a loan spell from Galatasaray.

Watford boss Quique Sanchez Flores was delighted to seal the signing of a versatile attacking player, who is set to join up with the squad later this week prior to the weekend visit of Newcastle United in the Premier League.

"He can play at number 10; he holds the ball, he can turn quickly with the strength of a striker and escape the defensive line.

"He can also play as a winger because he has that pace and velocity - the power that adds to the options of a team."

Amrabat made 14 appearances in all competitions for Malaga this season, despite having battled a knee injury.

His new club take on Swansea City in the Premier League on Monday.