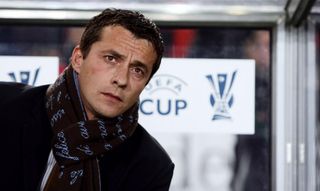 The former Scotland international stepped in for Oscar Garcia at the Championship club last Monday after the Spaniard was forced to resign, having spent time in hospital due to chest pains.

Garcia had only taken over from Beppe Sannino earlier in September, with Jokanovic the fourth man to take charge of the club this season.

McKinlay was unbeaten during his short tenure in charge - taking four points from games against Brentford and Brighton and Hove Albion.

The 46-year-old, who enjoyed a lengthy playing career as a midfielder at the likes of Chelsea and Deportivo La Coruna, has been backed by the club's owner Gino Pozzo to get the most out from the squad at his disposal.

"Our job is always to act in the best long-term interests of this football club. There can be no compromise on this - whatever the circumstances," Pozzo said in a statement on the club's official website.

"I fully support and endorse the view from our technical staff that, given the talented squad which has been assembled and our position in the league, an experienced head coach with a winning pedigree is of primary importance to help ensure the success we are all striving for.

"The supporters of Watford have always been very understanding towards our project here and I am certain they will continue to do everything they can to support the new coach and his squad."