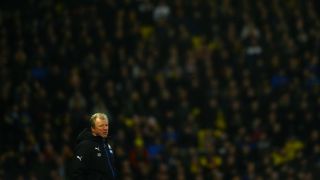 Watford's two goals early in the second half "killed" Newcastle in their 2-1 defeat at Vicarage Road, Steve McClaren said after his side's latest loss.

Newcastle were beaten for the fourth away game in succession when Odion Ighalo and Craig Cathcart put the hosts in control within 13 minutes of the restart after a goalless first half.

Jamaal Lascelles grabbed a goal back with a 71st-minute header but Newcastle's defeat leaves them stuck in the Premier League's relegation zone.

"We started the game so well and looked in control," said McClaren.  "The two goals really killed us. It's disappointing - we fought and came back.

"We threw everything at them - it wasn't our day.

"We talked about focus [at half-time] and the first 10 minutes being important.

"The second goal was from an aimless cross into the box. We then had a mountain to climb."

McClaren defended his team despite Newcastle losing to Watford for the third time this season in all competitions.

"Apart from the two goals - the performance was terrific. We've got to get it right at both ends," Newcastle's head coach said.

"We've had a tough Christmas. The last few results we've been growing and getting better. We lick our wounds and go again."