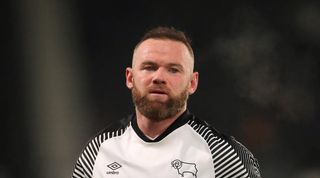 Wayne Rooney believes footballers have been treated like "guinea pigs" as the coronavirus continues to spread throughout Europe.

The Premier League and Football League were suspended until April 4 on Friday, an announcement that came much later than similar postponements across the continent.

And Rooney, England and Manchester United's all-time record goalscorer, believes people in his profession have not been treated correctly by the powers that be.

"After the emergency meeting, at last the right decision was made," the Derby player-coach told the Times. "Until then it almost felt like footballers in England were being treated like guinea pigs.

"The rest of sport - tennis, Formula One, rugby, golf, football in other countries - was closing down and we were being told to carry on.

"At Derby County, we sat at training on Thursday waiting for Boris Johnson to speak. People were anxious.

"Thankfully football made the right call in the end. We had to put the season on hold. Some people won't be happy but I just think, in this case, football has to come second. It's a sport. It's just a sport.

"We're happy to play until September if the season extends to then, if that's how it has to be. That's our job. As long as we know we're safe to play and it's a safe environment for spectators, we'll play.

"The next World Cup is in November and December 2022, so you could actually use this situation as an opportunity and say we're going to finish the 2019/20 season later this year, then prepare for 2022 by having the next two seasons starting in winter."