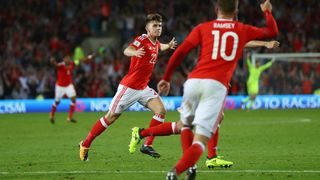 England manager Gareth Southgate concedes there was little he could do to influence Ben Woodburn's international allegiance after the Cheshire-born teenager scored on a stunning Wales debut.

Woodburn shot to prominence with a superb winner in Saturday's 1-0 defeat of Austria, the substitute's goal preserving his side's hopes of qualifying for next year's World Cup.

The 17-year-old attacker had been courted by England at youth level before confirming his commitment to Chris Coleman's Wales - the birthplace of his maternal grandfather.

Southgate wished Woodburn well for the future and insisted that capping players for the purpose of locking in their allegiance was not in the national team's interest.

"We have lots of kids who are dual-nationality in our programme and it is increasingly difficult to monitor all of them. You cannot pick all of them at younger ages," Southgate said ahead of Monday's clash with Slovakia.

"[Woodburn] is one that did train with us in some of the junior ages, but some of the countries are able to fast-track them more quickly and of course that appeals to some of the kids.

"And also some of them will feel that their heart belongs to other countries as well, so that is a personal choice and we wish him well."

Hen Wlad Fy Nhadau gets a spectacular assist in 's goal for  September 3, 2017