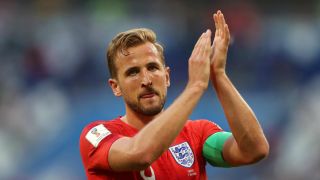 Croatia boss Zlatko Dalic is hoping his defence can repeat their heroics against Lionel Messi and Christian Eriksen when they face Harry Kane in the World Cup semi-final.

Kane is two goals clear in the race for the Golden Boot, the England captain having fired the Three Lions into their first semi-final since 1990.

Croatia have needed penalties to get through the last two rounds against Denmark and hosts Russia whereas England swept Sweden aside.

But having seen Croatia hold off Argentina superstar Lionel Messi and Denmark talisman Eriksen, conceding once in those two games, Dalic is optimistic they can do the same against Kane.

"It will be very hard, he is the top scorer and the best England player, alongside [Raheem] Sterling," Dalic told a news conference on Sunday.

"Dejan Lovren knows him and plays very well paired with Domagoj Vida so I am not concerned about stopping English players - we stopped Messi and Eriksen, and we'll try to do the same with Kane."

England's achievement in reaching the last four has been played down by some after they qualified from a group containing Tunisia and Panama before meeting Colombia and Sweden in the knockout phase.

But Dalic said: ""I don't think England had easy opponents, they made it look easy. That is a big difference. They are young and have a lot of talent. They play with great speed and aggression and are very dangerous from set pieces. England have no real weakness."

Vida will be free to face England having escaped with a warning from FIFA over pro-Ukraine comments he made in a social media video after Croatia's defeat of Russia.

But Dalic accepted the late finish of Croatia's quarter-final, coupled with extra-time exertions against Denmark, will pose his squad a physical challenge ahead of Wednesday's semi-final in Moscow.

"In the last couple of days we played two games that lasted 120 minutes so we are very exhausted," Dalic said.

"We must rest now but I am sure we will have enough energy to face England because there is hardly a greater motivation than a World Cup semi-final. Soon we will know what is the situation with our players that had some minor problems with injuries in the game on Saturday night.

"Everybody has problems! Some didn't get enough sleep, some got too much sleep. But it would be a shame to be in Russia for a couple of weeks and not get a chance to come to Moscow so we intend to stay there for the very last game.

"This is a dream come true for us. The big guys were sent home and the working teams stayed. And I don't see why it would be a surprise that Croatia went this far because we have great players."