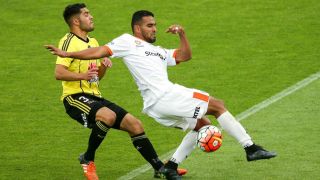 Brisbane Roar edged into the outright lead in the A-League after playing out a goalless draw at Wellington Phoenix.

A combination of international call-ups, injuries and suspensions meant selection upheaval for both teams and recalled Brisbane striker Jean Carlos Solorzano spurned his side's best chances during the first half.

The Phoenix are now without a win in five matches, although they threatened to steal the points in stoppage time when Kwabena Appiah's effort was deflected over.

Second-placed Western Sydney Wanderers' 3-2 defeat to Melbourne City on Saturday means Brisbane are now a point clear at the top of the standings.