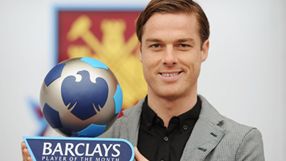 Gunners boss Wenger has been rewarded for his side remaining unbeaten during February. Wenger receives the Barclays Manager of the Month award for the 11th time in his career after Arsenal established themselves as genuine Barclays Premier League title contenders.

GEAR:10% off Arsenal and West Ham kits through Kitbag. Free delivery on orders over £50

Goals from Laurent Koscielny and Andriy Arshavin helped Wenger’s side start February with a 2-1 win over Everton. Whilst Arsenal were on the wrong end of a thrilling come back by Newcastle in the 4-4 draw away at St James' Park, they were back in form with a 2-0 win over Wolverhampton Wanderers thanks to a Robin van Persie double.

A first Barclays Premier League goal for Sebastian Squillaci was enough to secure a 1-0 victory over Stoke City at Emirates Stadium and earn Wenger his award.

Parker has been recognised after his outstanding displays helped the Hammers off the bottom of the Barclays Premier League table.

The England international has been instrumental in the recent upturn of West Ham’s fortunes, epitomised by a hard-earned 3-1 win over Blackpool at Bloomfield Road at the beginning of the month.

Parker played a key role as the Hammers bounced back from a narrow defeat against Birmingham City to earn a point in a remarkable second half come back against West Bromwich Albion, having been 3-0 down at half-time. His half-time team talk was described as inspirational by Carlton Cole.

He finished the month by opening the scoring against Liverpool and being acknowledged as the driving force behind the 3-1 win. He claims the Barclays Player of the Month award for the first time.

The decisions were made by the Barclays Awards Panel, which includes representatives from football’s governing bodies, the media and fans.