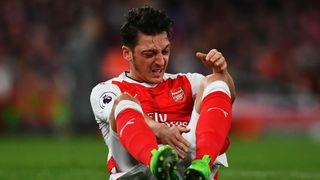 Arsene Wenger has apologised after Mesut Ozil kicked a door at White Hart Lane on Sunday, while the Arsenal manager also urged midfielder Alex Oxlade-Chamberlain to commit to the club.

The Gunners lost 2-0 away to Tottenham last weekend, ensuring they will finish below their north-London rivals for the first time under Wenger, who took over in 1996.

It has since emerged Germany international Ozil tried to speed up the impending demolition of Spurs' historic venue by lashing out after being required to undergo a drugs test following the defeat.

"I am sorry that he kicked the door," Wenger told a news conference ahead of the home game against Manchester United on Sunday.

"I don't think it was frustration towards the drug testers. It was frustration he lost the game. I don't know what happened. I was only told about it today. We will have a chat because it's always good to get the player's version."

While Ozil was disappointing against Tottenham and has struggled for his best form throughout the campaign, Oxlade-Chamberlain's displays have earned him the club's Player of the Month award for April, although the former Southampton man, out of contract in June 2018, has been linked with an off-season move away from Emirates Stadium.

"His performances have been convincing and positive," Wenger said of the 23-year-old.

"It looks like he's making a move forward and I'm very pleased for him. He's happy with his position where he plays at the moment. I'm convinced he has the qualities to play there.

"He has to commit his future to the club and I hope he will do so in the summer."

Thoughts on our Player of the Month, boss?"His performances have been convincing and positive, and he looks like he has moved forward." May 4, 2017

Everton's Aaron Lennon has this week been admitted to hospital for a stress-related illness, prompting journalists to question Wenger on Arsenal's structures for helping players cope with mental issues.

"When we do not meet their needs, like all of us, they are frustrated and suffer in certain situations, because the expectation is very high, [from] their families, agents, the pressure is very big. It's not easy to deal with at a young age.

"Not all the players, even if they feel the need, want to be helped by people who are at the club. Sometimes they don't want to show. It might be seen as a weaknesses inside the club."