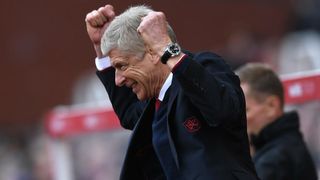 Arsene Wenger called for unity from Arsenal's supporters after ending the speculation over his future by signing a new contract.

Wenger extended his Emirates Stadium stay for a further two years on Wednesday, ending months of debate that divided the fanbase.

Now that his future is settled, though, Wenger asked for the supporters to show togetherness and insisted he was convinced the Gunners could reach the next level.

Wenger told Arsenal Player: "The message to the fans is in aid of the club. Let's be together to support our players, to support the club and all give our absolute best to be at the level that we want to be.

"We can move up to the next level, I'm convinced of that, by having faith in the way we want to play football and by supporting the players we have already.

"Of course we'll try to strengthen our squad to be stronger next season, but we want to be faithful to the way we want to play the game. We want to support this way [of playing] all together."

Wenger described his relationship with the club as a love affair, which made part of his decision to stay simple.

However, he did concede the demands of the job were the aspect that made his dilemma harder, following a campaign that saw Arsenal miss out on Champions League qualification for the first time in 20 years, despite winning the FA Cup.

Asked if the decision was easy or difficult, Wenger said: "For me it's always easy on a loving affair because I identify myself so much with the club.

"When you can be where you love to be, that's easy. It's difficult because you want to respond to the demands of all the people who love this club.

"This is of course a job that demands 100 per cent commitment and you want to be at that level to make sure you can make everyone happy.

"I'm happy and excited. Happy because I can work where I love to be. As well because this club cherishes the values I love.

"I'm excited because I believe that our end of season is a big springboard to go for more."

Wenger also thanked owner Stan Kroenke for his support after committing his future to the club until 2019.

"They are of course unlimited, our ambitions," he said. "We live in a very competitive world where you need the support of the owner as well.

"He's highly ambitious and supportive as well so, on that front, we are all united with exactly the same targets."