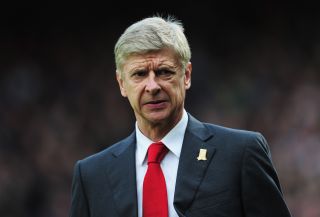 The Emirates Stadium outfit suffered lost their second home game in a row on Tuesday when Chelsea secured a 2-0 victory thanks to strikes from Cesar Azpilicueta and Juan Mata.

That setback followed a 2-1 loss to Borussia Dortmund in the UEFA Champions League last week, and next up for Arsenal is the visit of in-form Liverpool.

But Wenger allayed those fears and is confident the Premier League leaders will be fully focused on victory against Brendan Rodgers' second-placed side on Saturday.

"We will respond against Liverpool, don't worry," he told the club's official website.

"The home form is a concern but not as big as the statistics show it, because I felt in big games against Dortmund and (Chelsea) we gave easy goals away.

"There are positives and negatives, the negatives are we give the goals away, the positives are that we don't give many chances away. So we have to keep doing that and focus on the next game.

"It was a disappointing (result against Chelsea) because we put a lot of effort in and played at a high pace and put ourselves on the back foot.

"Then of course you have to take a big risk always and be a bit open on the counter-attack, and in the end we got punished."