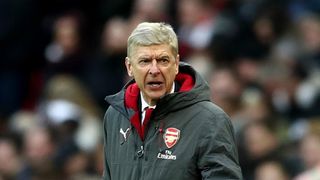 The 68-year-old announced on Friday that he will depart the Gunners at the end of the season, having won three Premier League titles and seven FA Cups in almost 22 years with the London club.

Dixon, who played under Wenger between 1996 and 2002, feels his revolutionary impact has been taken for granted in recent years and now is the time to reappraise his influence in England.

Writing for The Guardian, Dixon said: "There is no doubt he changed the face of English football. He was the first. It was all him.

"His legacy is not only Arsenal based. It is English football-based because of where the game was when he came in and how clubs and players operated.

"The physiology side of the game, the social side, training – he came in and ripped up the handbook. Everybody said, 'Who is this fella?' and the next minute they were all copying him.

"The advancements in terms of science and facilities and all the support available for elite athletes is testament to him. I truly believe he pushed the button to start all of that. It is easy to lose track of the fact he was the great innovator."

Another former Arsenal defender, Martin Keown, believes leaving the club will feel like a "bereavement" for Wenger.

Keown said in the Daily Mail: "Beyond his family, Arsenal and football are Arsene Wenger's two greatest loves. To give up one of them will feel like a bereavement.

"Arsene will find it difficult to come to terms with it. While he has made the right decision to leave after 22 years at the helm, I am sad that he could not find the perfect time to bow out.

"He is so emotionally attached to the club that it seemed impossible for him to make the decision. He stayed for longer than he should have but given his immense love for the club I fully understand why he could not bring himself to call it quits."

Keown also feels strongly that the Arsenal board should do whatever it takes to retain Wenger at the club in some capacity.

"Even if he goes to manage another team, it would be a crying shame if he is completely lost to Arsenal," he added.

"Wenger may be hurting but when the dust settles, a job should be found for him on the board. His wisdom, knowledge and love for the club is too valuable to be discarded.

"All Wenger has created presents an incredible opportunity for whoever replaces him but there will be ample opportunity to discuss who should take over.

"Now is the time to celebrate Arsene Wenger's remarkable reign and ensure that the club's greatest manager leaves on a high."