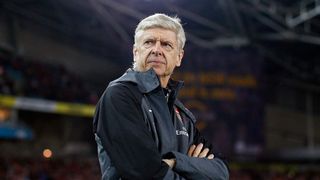 Arsene Wenger insists Arsenal have what it takes to win the Premier League this season despite their lacklustre start to the campaign and another disappointing transfer window.

The Gunners' only points this season came courtesy of a last-gasp home win over Leicester City, but Wenger believes his side – thrashed 4-0 at Liverpool before the international break – are title contenders.

Wenger endured mixed fortunes in his player dealings before the deadline, missing out on Monaco's Thomas Lemar, losing Alex Oxlade-Chamberlain to Liverpool, but keeping prized asset Alexis Sanchez amid interest from Manchester City.

With negativity prevalent among the Emirates Stadium faithful, Wenger struck an upbeat tone ahead of Saturday's visit of Bournemouth.

"Am I convinced we will be title challengers? Yes," said the Frenchman. "Why not? We have only played three games – and two away games.

"Okay, we lost at Liverpool, but we can redress the situation very well and very quickly. Some teams who are the new favourites are not in a better position than us.

"I think we are strong enough, yes. Stronger than last season? I think it depends on what period of the season. We had contrasting periods of the season last year.

"We have to show that you can improve by being together and improving together. Last year we made 75 points and we won the FA Cup. This year we know we have to do better."

Arsenal have not won the top-flight crown since 2004 and finished fifth last season, 18 points adrift of champions and London rivals Chelsea.