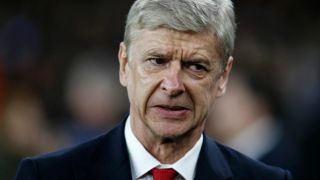 Arsene Wenger does not believe Real Madrid and Atletico will have to serve the transfer bans handed out by FIFA.

The world game's governing body hit both Spanish clubs with a sanction on Thursday which prevents them from registering players in the next two complete windows - this summer and January 2017 - for breaches "relating to the international transfer and registration of players under the age of 18".

Both Madrid and Atletico have already outlined their intention to appeal the verdict, the former describing it as "absolutely unacceptable" and the latter as a "huge injustice".

Wenger appeared to have some sympathy and suggested the punishment will be overturned.

He said at Friday's news conference: "The appeal will cancel the ban and they'll be allowed to buy in the next two windows like before. That's what will happen."

There have also been suggestions Madrid and Atletico may try to bolster their squads during the remainder of January before the ban comes into effect, causing a spike in the market.

Wenger admits he has considered that possibility but reiterated his belief that the affected clubs will be let off, adding: "I thought about that when I heard the news, but straight away they will appeal."