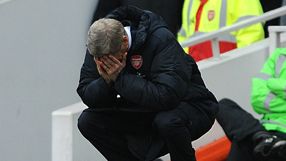 Arsenal appeared to be cruising at half-time after goals from Samir Nasri and Marouane Chamakh gave them a 2-0 lead but they buckled after the break as Tottenham snatched victory.

Tottenham had not won at Arsenal in the league since 1993 and before Saturday had not beaten one of the established big four sides away in the league in 68 attempts.

The damage to Arsenal's title ambitions was lessened by Chelsea's 1-0 defeat at Birmingham City, meaning the Gunners are still only two points off the pace, but Wenger said his side could not afford any more losses at  Emirates Stadium.

"Three home defeats are three too many," he told reporters after Spurs joined West Bromwich Albion and Newcastle United to leave the Arsenal stadium with three points this season.

"What is worrying for me is that we had an opportunity to go top of the league and when you have to deliver, we can't. That's worrying because that's part of our job.

"If you look at the stats and the numbers, it is very difficult to understand how we lost this game - a drop in concentration, some basic errors, some bad luck as well.

"You are a bit speechless to re-analyse the game. It is a mystery how you can lose a game like that.

"We put ourselves in the right position and we failed, so we have to accept that. That is mental more than football."

With none of the usual title challengers hitting top form, Wenger said 10 clubs could win the title this season and Spurs boss Harry Redknapp believes his side are in the mix.

Tottenham, who are competing in the Champions League for the first time after finishing fourth last season, are in sixth place with 22 points, just six behind Chelsea.

"You've got to aim for the top," Redknapp, who singled out former Arsenal defender William Gallas for special praise, told the BBC. "We're not writing ourselves off."

"We can beat anybody. This has put us right back in the race again. It's wide open. If my players believe in themselves as much as I do, we can achieve anything."

"We were either going to get beat 5-0, or have a go. That's what we did because that's my nature," added Redknapp.