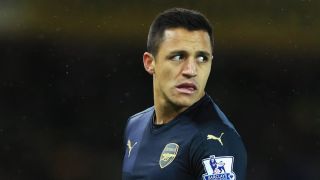 Arsenal manager Arsene Wenger is pondering whether or not to "take a gamble" by playing star forward Alexis Sanchez against Stoke City on Sunday.

The Chile international has not played since the 1-1 draw at Norwich City in November due to a hamstring injury, but is nearing a comeback.

Wenger has praised Sanchez's attitude in recovering from injury and will weigh up whether it is worth playing him at the Britannia Stadium – a ground Arsenal have not won in their last five visits.

Wenger said: "The question mark is about Sanchez, he has two decisive days – Friday and Saturday.

"He is fit and has worked very hard. The decision we have to take is whether to take a gamble on his injury."

And the Arsenal boss hopes Sanchez's return – along with the likes of Danny Wellbeck and Jack Wilshere – can give them a lift as they continue to battle for three trophies.

"At the moment we are in the beginning of January, top of the league, qualified in the Champions League, still in the FA Cup, so we can make it a fantastic season," he continued.

"The fact we have the injuries coming back can help."

The Frenchman also confirmed his squad had come through the dramatic 3-3 draw against Liverpool at Anfield on Wednesday unscathed, and revealed new signing Mohamed Elmeny was in contention to play this weekend.

Wenger added: "Elmeny, he is available for selection. There is a possibility he is in the squad on Sunday.

"I have not decided yet how everyone recovered, but there are no new injuries from Liverpool game."