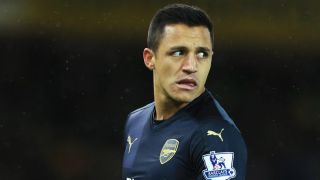 Arsenal manager Arsene Wenger expects to have Alexis Sanchez and Mesut Ozil back from injury on Sunday for the visit of Chelsea to the Emirates Stadium.

The Premier League leaders have been without Sanchez since late November owing to a hamstring problem, while Ozil missed last week's 0-0 draw at Stoke City with a foot inflamation and illness.

However, both are set to be fit for the weekend, while Francis Coquelin and Danny Welbeck are also on the way back after respective knee injuries.

"Compared to last week at Stoke, we have no big problems. Ozil is available and with Sanchez the next two days will be decisive," Wenger said.

"This time we feel he will make it to be available for selection.

"[Coquelin is] back training today ahead of schedule. Welbeck will be back in training next week and [Tomas] Rosicky will play tomorrow with the Under-21s."

Having injured his hamstring at Norwich City in November, Sanchez suffered a setback during training in mid-December and Wenger is eager to avoid taking any risks with the Chile international.

"The doubt is he has been out for a long time," he added.

"The tests are one thing, training is another and then the intensity of the game you can never repeat.

"I am cautious with him because we can't afford to have a setback as it would mean a long period out. We don't want to take this gamble. The signs in training are positive.

"We have done well in their absences and without big players, but it's a good opportunity to have everyone back in front of an important schedule as we want to do well in the FA Cup and the Champions League.

"It's good to have everyone back. Strikers give you goalscoring and I feel sometimes when you have 70 minutes gone and a strong bench it gives you a big chance."