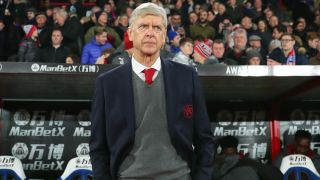 Arsene Wenger says he will not rest players for the first leg of Arsenal's Europa League tie with Ostersund on Thursday.

The Gunners head to Sweden for the last-32 clash off the back of a damaging 1-0 defeat to north London rivals Tottenham on Saturday, which has left them seven points adrift of the Premier League top four.

Wenger used the group stage to give opportunities to a number of young players, including Ainsley Maitland-Niles and Eddie Nketiah, but denied after the loss to Spurs that he would prioritise their European campaign over the league in their quest to return to the Champions League.

However, with no FA Cup commitments this week and no domestic matches until the EFL Cup final on February 25, Wenger is prepared to name a strong side against Ostersund.

"I would have anyway gone for it, especially as we have no game between the two matches," said the Arsenal manager.

"I will play the normal team because it is one of the opportunities we have especially because we don't play in the FA Cup. There is no reason why I should rest players."

Wenger is desperate to see Arsenal's away form improve, with his side having won only one of their last nine matches on the road in all competitions.

"We have to win the next game," he said. "Our record since I've been at Arsenal is one of the worst away from home. Certainly, the worst since I'm in England.

"That doesn't work, we have to play much better away from home and make superior results if we want to have a chance to come back."