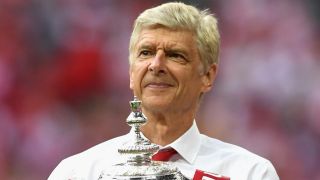 Arsene Wenger wants to add "top, top quality" signings to his Arsenal squad after agreeing a new two-year contract to remain as manager.

Months of speculation over the Frenchman's future were ended with the announcement of a new deal on Wednesday, the 67-year-old's attention now publicly turning to next season.

Wenger is desperate to use Arsenal's strong end to the 2016-17 campaign, which saw them rally to lift the FA Cup – giving him a record seventh win in the competition – to make a fast start next year.

He feels the Gunners must seek to streamline the playing group, with a focus on adding only those stars who can make a big impact on the club's fortunes.

"First of all, we have a very heavy squad at the moment so maybe we might lose some players," he told Arsenal Player.

"We want to keep the strength we have and build on that. We will work very hard to find the additions of top, top quality.

"I believe that our squad is very strong and we will only look for top-class people who can strengthen our team now. The basis is there so we need the additions who will make a real difference.

"We look at the top, top quality available. We have seen in the recent games against Manchester City, Chelsea and Manchester United that we are a very strong team."

7 - Arsene Wenger has won seven FA Cup trophies as a manager; the most in the history of the competition. Specialist. May 31, 2017

Asked about which areas he wants to strengthen, Wenger said: "For us it's very important that we only consider the players who can really make a difference, no matter where it is.

"We forget that we have top-quality people already and, if you look closely at the players who left us, every player who came here became a better player.

"You cannot say [that] about every player who left us. We have a very good record with the team and the improvement of the players here. We have to continue that but we are also looking everywhere to become even better.

"We have created a dynamic that is very positive and we want to build on that and transfer that positive end of season [form] to the new season.