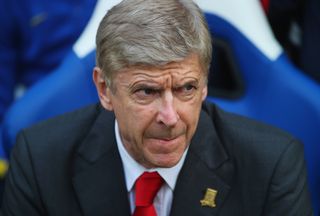 A 2-0 victory at Crystal Palace on Saturday left Wenger's side in first place after nine games, with 22 points - two more than second-placed Liverpool.

Arsenal have recovered strongly from an opening-day defeat at home to Aston Villa, but Wenger is refusing to get carried away as the club chase a first league title in a decade.

"It's a good feeling without any massive significance," the Frenchman said.

"We always had a high level of aspiration - the only thing we can do is win our games.

"The only thing that is important is that every win makes you stronger, we have difficult games coming up. That will be a good test.

"We are ambitious; we want to do as well as we can. We want to win this title, unfortunately it is not always possible."

The only sour note in Arsenal's game was Arteta's dismissal for hauling down Marouane Chamakh near the halfway line.

The Spaniard was adjudged to have denied a goalscoring opportunity by referee Chris Foy, but Wenger disagreed with the official's call.

"It was a wrong decision because it has to be a good goalscoring opportunity," he explained.

"It was far from goal; it was an accidental foul; he was not the last man. The referee got that wrong."

Arsenal face a tough run of fixtures, meeting Chelsea in the League Cup on Tuesday before Premier League meetings with Liverpool and Manchester United sandwich a UEFA Champions League clash with Borussia Dortmund.