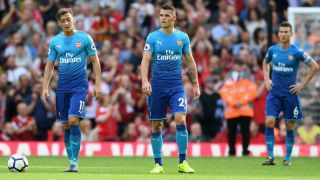 Arsene Wenger wants to put the memory of Arsenal's painful 4-0 hammering at the hands of Liverpool firmly in the past when the sides reconvene on Friday.

The Gunners were comprehensively outplayed at Anfield back in August as Jurgen Klopp's men ran riot - Roberto Firmino, Sadio Mane, Mohamed Salah and Daniel Sturridge all on the scoresheet.

Arsenal come into Friday's meeting at Emirates Stadium fifth in the Premier League, a point and a place behind their opponents, and Wenger has called on his players to avenge that early-season humiliation.

"When you have such a long career as I have, you have some defeats unfortunately that hurt you for the rest of your life," he said.

"I believe what is interesting in football is you always have a time to make up for it. When you can put things right, do it

"So let's focus on what is in front of us and turn up on Friday night with a completely different performance.

"The motivation is there. This squad has a good mentality and it is about us, to make sure we are on top of our game. We must play with pace and a determined attitude."

That 4-0 drubbing proved to be Alex Oxlade-Chamberlain's last appearance for Arsenal before leaving for Liverpool and although the England international attracted widespread criticism for his display on that day, Wenger refused to point the finger at his former player.

"It would be not fair to put the defeat at Liverpool, where the whole team had a bad performance, on one player," he said.

"After that, on the other side, you analyse 'did you make mistakes or not?' You cannot go home and say everything was perfect when you lose like we did.

"I rate Alex highly and he knows that. After that, you want all the players to be respected who have played for us."