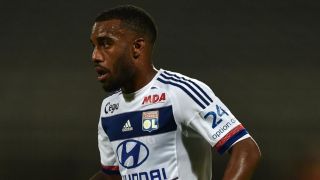 Arsene Wenger says he will keep Arsenal's transfer plans "secret" after Lyon claimed they had turned down a €35million Gunners bid for Alexandre Lacazette.

Wenger has so far made just two signings in the close season, bringing in 20-year-old Rob Holding following the arrival of Switzerland star Granit Xhaka from Borussia Monchengladbach.

Lyon said on Tuesday they had turned down an approach for Lacazette and denied Arsenal had returned in recent days with a second offer.

And Wenger says he will not go public on the pursuit of targets until any deals have been agreed.

"Lyon is responsible for their own statements," he said. "On the transfer front, I think the best [option] is always to keep [it] as secret as possible. If we sign somebody, we will announce it. But I cannot tell you much more on that."

Wenger went on to praise the developing qualities of youngster Gedion Zelalem, and he expects the 19-year-old to play a part in Thursday's pre-season game against an MLS All-Star side.

"Last season he was on loan at Glasgow Rangers, where he did quite well," he said. "He is a player with top quality. He might take a bit longer to mature because he was physically a little bit behind on body structure but I'm sure he will be a great player.

"He [matured a bit slowly] physically but overall I’m convinced that he will make a great career."