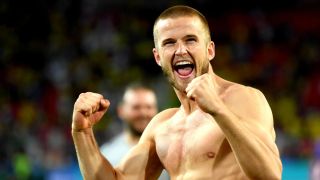 Eric Dier hopes England's dramatic World Cup penalty shoot-out win over Colombia on Tuesday has put them back in the nation's "good books".

The Tottenham midfielder scored the decisive spot-kick to help Gareth Southgate's men set up a quarter-final clash with Sweden following a 1-1 draw in Moscow.

Dier was part of the side that crashed out of Euro 2016 after an embarrassing defeat to Iceland - a result that led to the resignation of manager Roy Hodgson.

Southgate has transformed the fortunes of the Three Lions over the past two years and Dier knows the result against Colombia will have gone some way to erasing the painful memories of that Iceland humiliation.

"Yesterday was a massive milestone for us as a group because we hadn't won a knockout game for so long", he told the FA's YouTube channel.

"Two years ago a lot of us were in the squad that lost to Iceland at the Euros.

"I remember saying after that game that the only way we can move forward from this and get back in everyone's good books is at the World Cup in two years' time."

Dier was England's surprise fifth penalty taker, confidently stroking past David Ospina to secure a place in the last eight.

He has joked, though, that the outcome would have been a lot less emphatic had he been faced with a similar situation during a round of golf.

He added: "Somebody messaged me today, saying: 'I still wouldn't trust you over a four-foot putt!'

"If I was putting that thing I would have missed, 100 per cent.

"I've played football all my life so it came naturally. I tried to stay in the moment and their player missing just before me calmed me down a bit because I knew it would win it for us.

"If it had been to keep us in it, it could have been a more nerve-wracking experience."