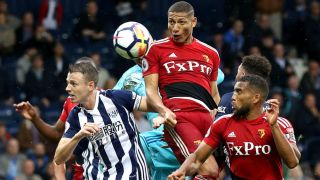 Richarlison proved to be Watford's hero once again as his late header rescued a 2-2 draw against West Brom at The Hawthorns on Saturday.

After scoring a dramatic winner away at Swansea City last weekend in the Premier League, the Brazilian popped up with an injury-time equaliser to complete an impressive comeback after Watford had trailed 2-0 in the first half.

The goal - conceded in the fifth minute of added-on time - denied West Brom a maiden win in September after they had scored twice in the space of three first-half minutes.

Salomon Rondon's first goal of the league season was quickly followed by a header from Jonny Evans, meaning the hosts had scored twice in a Premier League game for the first time in the campaign.

Yet Watford fought back impressively to preserve their unbeaten record on the road, Abdoulaye Doucoure halving the deficit with a left-footed drive before Richarlison nodded in Jose Holebas' free-kick right at the death.

FT | West Brom 2-2 Would you believe it?! Richarlison does it again right at the death!Listen live September 30, 2017

Dignified in defeat at Arsenal on Monday, West Brom took the direct approach to open the scoring in the 18th minute. Grzegorz Krychowiak's long ball over the top allowed Rondon to bully his way beyond Christian Kabasele before somehow beating Heurelho Gomes from an acute angle.

Their second owed a debt of thanks to the unfortunate Doucoure, the Watford midfielder inadvertently flicking on Matt Phillips' corner from the left to allow Evans to provide the finishing touch from close range.

Watford were fortunate Ahmed Hegazi did not capitalise on a misjudgement from Gomes to make it 3-0 from another corner, yet the visitors - who had won their first three away league games this season - finished the first half strongly to raise hopes of a comeback.

After inadvertently teeing up Andre Carrillo with a scuffed shot that his team-mate headed over with the goal at his mercy, Richarlison provided the assist for Doucoure, who strode forward to claim a through pass before beating Ben Foster with a low, left-footed shot into the bottom right corner.

Silva's side continued to look the more likely scorers early in the second half.

Etienne Capoue's crisp drive appeared on course to find the net, only for Gareth Barry - making his 634th Premier League appearance - to get a crucial touch and deflect the ball wide.

Still, Watford struggled to turn their dominance into opportunities against a West Brom side that were happy to sit on their lead to such an extent that Foster was warned about time wasting with 25 minutes still to play.

It appeared their defence would hold firm until a set piece on the left gave Watford one last chance. While goalkeeper Gomes could not quite get on the end of Holebas' wonderful delivery, Richarlison rose to head in an equaliser in the nick of time.